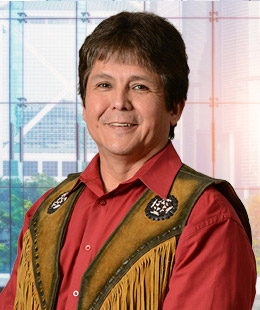 Chief Clarence Louie believes that socio-economic development is a prerequisite for First Nation self-reliance and will facilitate a return to our working culture – the self-supporting lifestyle of our ancestors.

Chief Clarence Louie was first elected to the Osoyoos Indian Band in 1984. Under his leadership, the Band has developed into a multi-faceted corporation that owns nine businesses and employs hundreds of people. Chief Louie formed the Osoyoos Indian Band Development Corporation to manage these businesses and seek new economic opportunities. Currently the Band owns and operates vineyards, retail stores, a construction company, a Readi-Mix company, a championship golf course and eco-tourism businesses. In 2002, the Band opened the first Indigenous-owned winery in North American named Nk’Mip Cellars. The Band models not only business development but also socio-economic development. Chief Louie stresses the importance of maintaining Okanagan language and culture in all aspects of the Band’s activities including business. The Nk’Mip Desert & Cultural Center provides visitors the opportunity to experience Okanagan culture and to explore the desert lands that are a part of its traditional territory

Other achievements under Chief Louie’s tenure include the negotiated settlement of three Specific Land Claims, the successful negotiation of over 1,000 acres of lease developments, the acquisition of hundreds of acres of land to add to the reserve, the purchase of a viable off-reserve business, the financing of a major golf course development, the initiation of the Osoyoos Indian Taxation By-law, the financing and building of a new pre-school/daycare and grade school/gymnasium, the construction of a new Health Center/Social Services building as well as a youth center and finally, the construction of a $200-million correction facility which will be ready in 2015.

Chief Louie’s efforts have been widely recognized in Canada and the United States. In 1999, he received the Aboriginal Business Leader Award from All Nations Trust and Development Corporation. In 2000, the Advancement of Native Development Officers (CANDO) named Chief Louie the “Economic Developer of the Year”. In the same year, Clarence was chosen to join the Governor General of Canada in the 2000 leadership tour. In 2001, Chief Louie was appointed to the Aboriginal Business Canada Board and most recently was appointed Chairperson of this Board. In 2002, Aboriginal Tourism B.C. awarded Chief Louie the “Inspirational Leadership Award”. MacLean’s Magazine listed Chief Clarence Louie as one of the “Top 50 Canadians to Watch” in their January 2003 issue.

More recognition came in 2003 as the U.S. Department of State selected Clarence as 1 of 6 First Nation representatives to participate in a 2-week tour of successful American Indian tribes. In April 2004, the National Aboriginal Achievement Foundation presented Clarence with the award for “Business and Community Development”. The National Aboriginal Achievement Awards represent the highest honor the Indigenous Community bestows upon its own achievers. In June 2006, Chief Louie was presented with the Order of British Columbia, which is the province’s highest honor for outstanding achievement. In November 2016, he was awarded the Order of Canada, one of Canada’s highest civilian honours, “for his innovative contributions to increasing economic opportunities for Indigenous communities”.