Ottawa, ON – The National Indigenous Economic Development Board (NIEDB) is calling for increased investment in Indigenous economic development and highlighted this during a meeting with federal Ministers Bennett, Wilson-Raybould, and Tootoo. The Board’s work and research has shown that investment in Indigenous peoples and communities results in real contributions to the national GDP and improved regional economies throughout Canada.

The Board made a number of recommendations to assist the Government of Canada in meeting its objectives to achieve better outcomes for Indigenous economic development as set by Prime Minister Trudeau in the mandates given to his Ministers. 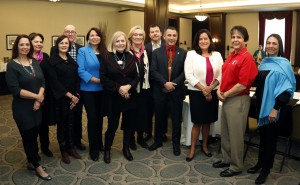 The Government of Canada has made the relationship with Indigenous peoples a top priority and the Board believes that this should be adequately reflected in the budget. These recommendations include:

The Board believes that economic development is a foundational element in achieving reconciliation. Progress in economic, business, and community development can be achieved when supported by strong Indigenous led governance structures, sufficient and appropriately targeted financial investments, and innovative policy development in partnership with Indigenous communities.

It is in the interest of all Canadians, Indigenous and non-Indigenous alike, to ensure that First Nations, Inuit, and Métis are full participants in the economy and are able to make meaningful contributions to Canada’s economic prosperity.

Last week’s meeting represents a historic juncture for a promising partnership committed to bringing transformational change to the relationship between Canada and Indigenous peoples, to address historic wrongs and to make real and lasting improvements to the socio-economic conditions of Indigenous peoples.

Established in 1990, the National Indigenous Economic Development Board is a Governor in Council appointed board mandated to provide strategic policy advice to the federal government on issues related to Indigenous economic development. Comprised of First Nations, Inuit, and Métis business and community leaders from across Canada, the Board helps governments to respond to the unique needs and circumstances of Indigenous peoples in Canada.

Closing the Gap: The NIEDB urges the federal government to invest in Northern...The NIEDB Identifies Economic Development as a Foundational Element to Achieve...
Scroll to top