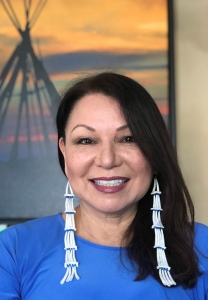 Economic development and following Anishinabek traditional values are the keys to addressing the challenges that face her people.

Dawn Madahbee Leach, an Anishinabe-kwe and member of the Aundeck Omni Kaning First Nation, has been the General Manager for the Waubetek Business Development Corporation since 1988. Waubetek is a leading Indigenous Financial Institution that provides financial services to Indigenous entrepreneurs and 27 First Nation communities in Northeastern Ontario (central Canada). She is the first Indigenous woman in Canada to head up a regional financial lending institution. At Waubetek, Ms. Madahbee Leach has been instrumental in the establishment of major regional initiatives as well as $100 million in investments in Indigenous businesses and economic projects. Nationally, she has helped design programs that meet the capital needs for Indigenous businesses and First Nation communities.

Ms. Madahbee Leach also currently serves on the Boards of Peace Hills Trust and NioBay Metals Inc. She has also served on her First Nation Council and was the former Chairperson of the Northern Policy Institute and the Northern Ontario Development Corporation and a former director of the North-East Integrated Health Network, the Ontario Development Corporation and Innovations Ontario Corporation. She has spoken and promoted Indigenous businesses internationally in regions such as Australia, Sweden, Germany, the United States and the United Kingdom. Ms. Madahbee Leach is the owner of Indigenous Business International, a company that provides advisory and strategic planning services.

Dawn is the recipient of a 2020 Indspire Award for Business and Commerce and was recognized as one of Canada’s 100 Most Powerful Women in 2018.  She also received the Meritorious Service Medal from the Governor General in 2018.  She has also received the Anishinabek Nation Achievement Award in 2011. In 2004, she was recognized as a Mover and Shaker for economic development in Northern Ontario Business. Ms. Madahbee Leach was contributed a chapter in the book “Changing Lives: Women of Northern Ontario”. She also contributed to a book compilation entitled “Governance in Northern Ontario – Economic Development and Policy-Making” by Segsworth and Conteh with her chapter “First Nations Inclusion: A Key Requirement to Building the Northern Ontario Economy”.

Ms. Madahbee Leach graduated from the University of Waterloo’s Economic Development Program and holds a degree in Political Science and Law from York and Laurentian Universities.